The 10 most expensive anonymous guitars in the world
32
post-template-default,single,single-post,postid-32,single-format-standard,ajax_fade,page_not_loaded,,qode-title-hidden,qode_grid_1300,qode-content-sidebar-responsive,qode-theme-ver-17.0,qode-theme-bridge,disabled_footer_bottom,wpb-js-composer js-comp-ver-5.5.5,vc_responsive 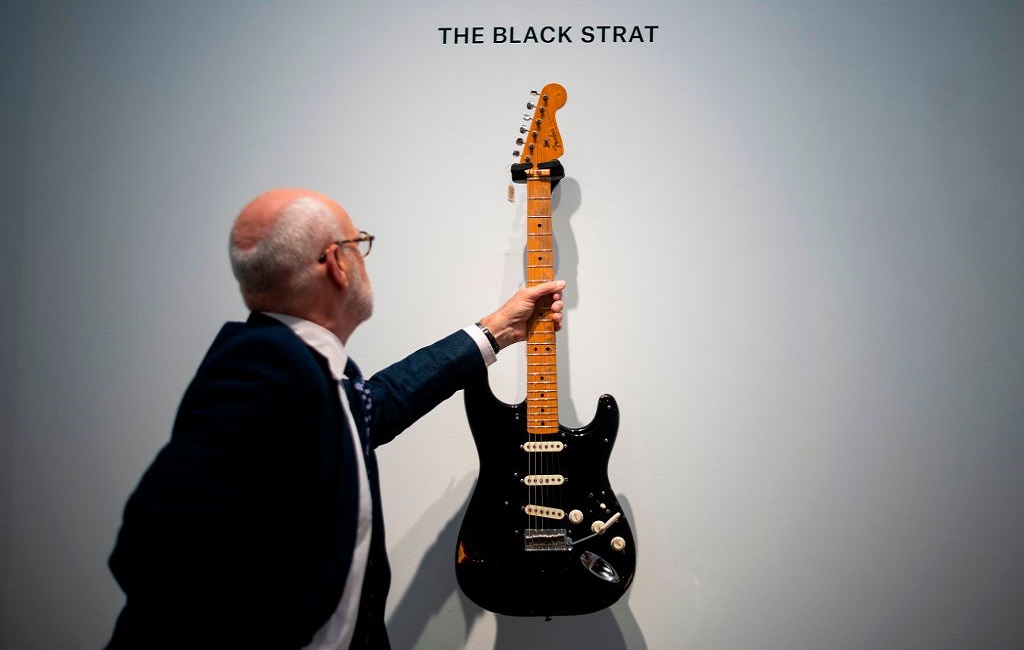 16 Jul The 10 most expensive anonymous guitars in the world

Posted at 13:48h in Musical Instruments by Alex Caldwell 0 Comments

Unless you live in a cave, you are aware that the sale of David Gilmour’s guitars has exploded a record. From now on, the most expensive guitar in the world is the Black Strat of the guitarist of Pink Floyd who left for the trifle of $ 3.9 million. It makes you dizzy even when you take into account the historical value of the instrument in question.

The sale of David Gilmour’s collection of guitars, 120 instruments, generated more than $ 21 million, the profits of which will be donated to an association that fights against global warming. Some pieces have greatly exceeded the price of their initial estimate. This is also the case with the Black Strat which was estimated at $ 150,000.

The value of instruments that have a history sometimes exceeds estimates by a large margin, this is nothing new. In 2014, Kirk Hammett spent $ 2 million to acquire Greeny, the 1959 Gibson Les Paul from Peter Green (Fleetwood Mac). In 1998, Paul Allen (co-founder of Microsoft) would have spent the same amount to afford the Fender Stratocaster of 1968 that Jimi Hendrix had used at Woodstock.

So, we wondered what were the most expensive guitars in the world. But to complicate the task, we decided not to be interested in guitars that belonged to famous musicians. It is arbitrary but it is easy to understand where the high value of an instrument having been owned and played by an Eric Clapton, a Jimi Hendrix or a Bob Dylan comes from.

This Fender Stratocaster, for lack of belonging to them, was signed by some heavyweights of modern music including Eric Clapton, Jimmy Page, David Gilmour, Mark Knopfler, Tony Iommi, and many others.

It is the charitable nature that makes this auction exceptional, for a Stratocaster all in all quite banal. In 2005, the sale of this guitar generated $ 2.7 million for the ” Reach out to Asia ” foundation to help the victims of the December 26, 2004 tsunami.

Well, we admit that we made a small departure from our initial constraint for the establishment of this list since the guitar belonged to singer-guitarist Bryan Adams. But, it was not its owner who made the value and we still wanted to show it to you!

We talked about it in 2015 – The guitar that was worth $ 2 million – but it is a guitar that has never been put on sale, hence this second unofficial position.

Fruit of the collaboration between Gibson, Coronet jewelry, and designer Mark Lui, this Gibson SG Eden of Coronet is more of a work of art than anything else. 400 carats of diamonds, 1.6 kilos of gold … You have to think of hiring an army of bodyguards for those who plan to play on this guitar!

Its name is clear enough to explain this million-dollar price. This guitar is the work of a Los Angeles musician/luthier, Joseph King. The body is swamp ash is covered with a layer of 18-carat gold … A gold top in the literal sense of the term. The hardware and the logo on the head of the handle are also in 18-carat gold. The luthier did not push the vice to install mechanics and inlays of the gold handle … Too luxurious probably.

For the record, we don’t know if the guitar was ever sold. The price of a million dollars is that fixed by the luthier for its creation. Even if there is no shortage of wealthy collectors who love the bling on Earth, one can wonder if it has found its owner.

If rarity is expensive then a 1958 Gibson Explorer deserves its place among the most expensive guitars in the world. Indeed, Gibson produced less than 50 copies that year. In the absence of success, the model was withdrawn from the brand’s catalog in the early 60s. The Explorer could have been forgotten but it was able to seduce some guitarists including the young The Edge (U2) in the 70s and then many other guitarists from the 80s.

Only 38 Gibson Explorer of 1958 remain. This specimen has no particular history. The guitar is said to have been purchased in 1963 for $ 247.50 to be given as a gift. It seems to have been used very little until its sale in 2006 in Boston.

There is little information on this private sale which would have taken place in 1994. At that time, it would have been the holder of the record of the most expensive guitar. Normal for a prototype of the one that launched the success of the solid-body electric guitar!

In 1949, around fifty copies of the Broadcaster were produced by Fender. The commercial success of this guitar will be under the name of Telecaster (we come back to this a little later), so it is not surprising that the prototypes are invaluable even if most must be unplayable since the sleeves were then not equipped with the truss rod.

Although being the first acoustic guitar of our top 10. We hesitated to include it in this list since the real price of the sale is not clear. This 1942 CF Martin D-45 is one of 91 Martin pre-war cars manufactured between 1933 and 1942 and which collectors love. After sleeping in a closet for a long time, she emerged in 2011 on an eBay auction that quickly caught the attention of collectors and vintage guitar professionals.

The appraisal by George Gruhn and Walter Carter of the Gruhn Guitars vintage guitar store was $ 375,000. However, the immediate purchase price listed on eBay was $ 325,000. That’s why we put this guitar in the fourth virtual position.

The history of this auction is a bit funny. In 2014, 260 instruments from a collection of a businessman aficionado of acoustic guitars were put up for auction at Guernsey’s. Too few bidders, very high estimates and this is an auction that has gone “wrong” since less than half of the guitars have been sold and all below the estimate. A great failure …

Finally, not for everyone. This 1930 Martin OM-45 Deluxe, of which there are only 10 copies out of the 14 manufactured that year, was estimated at nearly $ 900,000. It finally sold for $ 366,000 … A good deal! The icing on the cake is that the company CF Martin & Co bought it and put it prominently at the Martin Guitar Museum in Nazareth, Pennsylvania.

This hybrid between a guitar (Vox Phantom) and an organ (Vox Continental) is the oddity of the top 10. The instrument acquired for the modest sum of $ 305,000 is a prototype that Dick Denny. Its inventor gave it to John Lennon. If we still integrated it into the top 10, it is because the attempt to endorse did not take.

The Vox V251 has never been used by John Lennon, nor by any of the Beatles’ members who were not very stingy with experiments. Prototype too heavy and too complicated to use, Lennon seems to have offered it to Mal Evans, a Beatles roadie. It was only long after his death that the instrument was put up for auction.

The famous Nocaster, sought after by collectors because they represent a very singular story, even if it is banal. The original name of the Fender Broadcaster guitars was a name registered under the spelling Broadkaster by the brand Gretsch which used it for a drum model. At Gretsch’s request, Fender complies and renounces the name Broadcaster. But before affixing the name of Telecaster on the head of the guitars some models of Broadcaster will be sold with only the name of Fender on the head or without a name at all.

This particular copy put on sale on June 8, 2012, has a signature on the back of the head. The autograph in question is that of Les Paul to whom Leo Fender had presented the instrument. From there to say that this simple signature has inflated the historic value of the guitar. There is only one step … that we will not cross.

On April 21, 2012, after a 10-minute neck-and-neck between two bidders, this 1949 Bigsby Solid Body sold for $ 266,500. Deke Dickerson, the expert who inspected the instrument, said it was the fourth guitar built by Paul Bigsby. Its serial number indicates that it would have been completed on May 16, 1949.

The recipients of Paul Bigsby’s first guitars are known. For example, the first Bigsby guitar completed on May 25, 1948, was for Merle Travis. Exception … There is no record relating to the name of the owner of this number 4 guitar. All we know about it is that it exists. And that it is authentic despite some anomalies noted by Deke Dickerson.

According to the official Bigsby website, no one knows exactly how many instruments Paul Bigsby made who did not keep a register. Only 47 instruments including 6 standard guitars are listed but there could be more. The rarity and a name that has left its mark on the history of the guitar alone increase the value of these instruments.